It is fairly impressive that a company can get to celebrate it’s 100th Anniversary but 200th is crazy. Yet we Brits seem to have enjoyed our mustard so much that Colman’s has been make it for us for 200 years. 200 years ago Jane Austen’s Mansifeld Park was published, The Times Newspaper was first printed using a steam press, Beethoven was writing Symphonies, the Industrial Revolution was in full swing and Queen Victoria hadn’t been born yet. A lot has happened since it’s founding including two Women as Queen and head of state, two World Wars, invention of electricity and all the technology which goes with it and the amazing mustard from Colman’s has survived! I for one am glad.

To celebrate the 200th anniversary I have whipped up these gorgeous Colman’s mustard with shallot sausage rolls. Very easy to make and are brilliant picnic and party food. 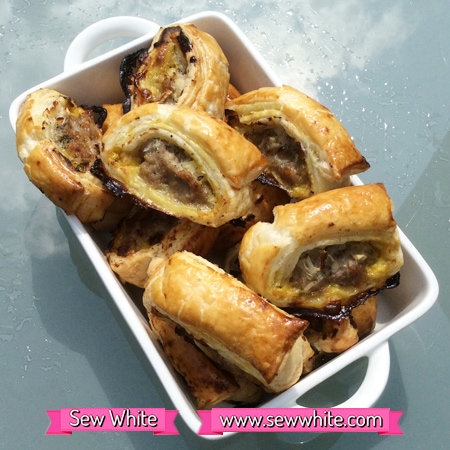 Colman’s have bought out gorgeous new little pots with examples of their old posters and advertising campaigns to celebrate their history over the last 200 years.

This recipe is incredibly simple and can be adapted easily too.

– Preheat the oven to 180 degrees/160 fan.
– Unroll the pastry and place the mustard in a strip down the middle, making the middle third yellow.
– Squish the sausage meat into a long sausage and place in the middle of the pastry on top of the mustard.
– Add the cut up shallots and onions.
– Season with salt, pepper and some dried oregano/thyme too if you would like.
– Fold one side of the pastry over the sausage meat on to the middle third and do the same with the other third.
– Cut up the roll in to good inch slices. I normally get about 12-14 out of a roll.
– Put the slices on to a non stick baking tray or one with greaseproof paper. Don’t put them too close together as they will spread.
– Brush with the egg and bake in the oven for 30 minutes until golden brown.
– Serve when hot from the oven or let them go cold to take them for a picnic.

Simple to make all you really need is pastry and sausage meat.

The mustard on the pastry with sausage meat, shallow, salt, pepper and dried herbs. 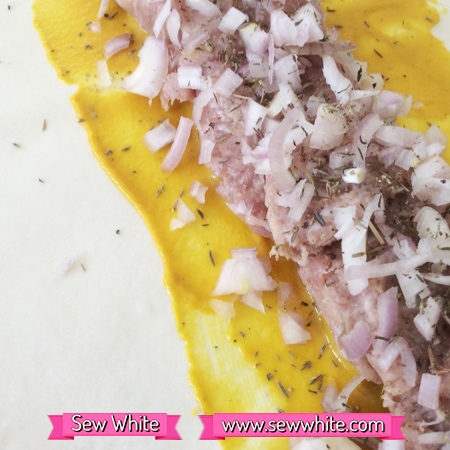 Cup up, brushed with egg and ready for the oven. 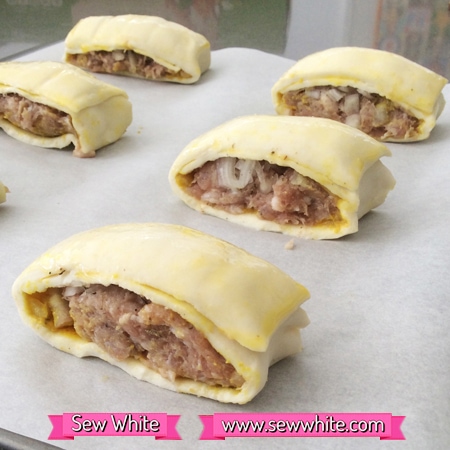 I need these this weekend. Apple pancakes topped w

Craft time! Making a felt envelope is the cutest w

Mrs. Dalloway said she would buy the flowers herse

This delicious Lamb Meatball Salad is a perfect we

Check out my picks for the best Valentine’s Day

Healthy and tasty party food. My Parma Ham and Pea