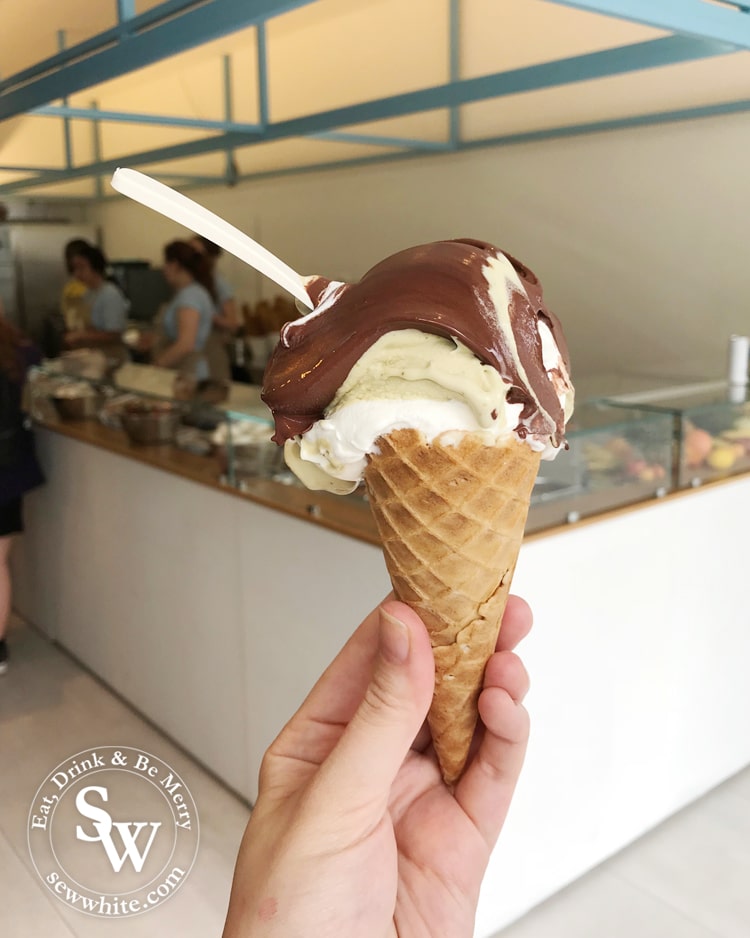 G like Gelato Wimbledon is the newly opened gelato store in the heart of SW19. The ice cream is incredible and freshly made in front of you, plus they also offer gluten free and vegan options.

This is a beautiful sight!

Freshly scooped up from Rome, G like Gelato has landed in the UK and their first store is in Wimbledon. (It’s so close to the station if you’re passing you have to visit. It’s between the two entrances to the station on Wimbledon Bridge). The selling point of this incredible gelato is that it’s freshly made right in front of you. The flavours change each time you visit, of course leaving a few core favourites like chocolate and vanilla. Plus catering to vegans and gluten free ice cream fans will make them very popular.

The store itself is very bright and airy and the staff are very happy and chatty which makes choosing your flavour a great experience. The store offers something special in the way they produce and sell their gelato. You feel excited and slightly overwhelmed with the gelato choices in front of you and in my case very childlike. Aren’t we all children when we see ice cream like this?! It’s  very simple what G like Gelato are trying to achieve – creating a space where gelato is special. I can safely say they master it.

I wouldn’t be surprised to see G like Gelato scooping up new stores all over London with the success of their first UK venture. When I’ve visited there has always been a queue and so many happy faces enjoying their giant cones of gelato. Sparking interest and envy from those queuing wanting to have beautiful gelatos too. The best test of anything food related is return visitors and having been there rather a lot in their first month they definitely have captivated me to enjoying this authentic Italian gelato.

Freshly made in store in front of your eyes. 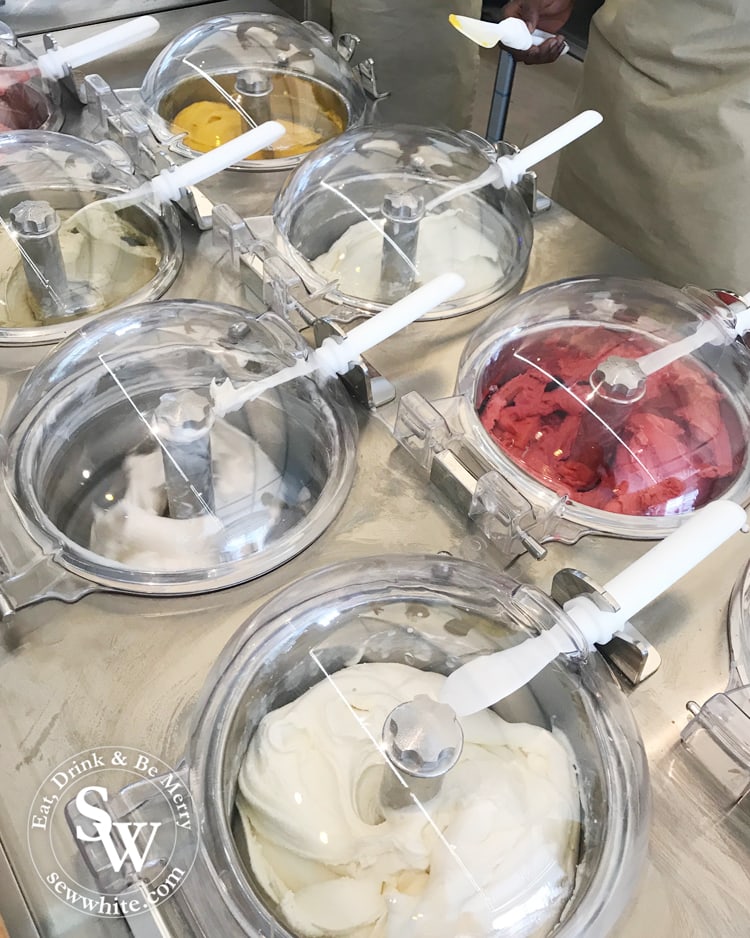 The counter in G like Gelato is set out with the individual gelato makers for you to see. Each machine has a different flavour and they range from rich dark chocolate to fruity sorbets. They also have some extra special flavours including the Italian favourite fior di latte, a simple creamy milk gelato which is smooth and very refreshing and normally a favourite among children. It’s also one of my favourites. The other flavours on offer include ‘crema al limone’, a zesty lemon custard flavour, ‘caramello salato’ a delicious salted caramel. The favourites in the shop have been ‘nocciola’ hazelnut, pistachio and of course coffee.

I can’t wait to see what they produce seasonally for Christmas! Hopefully something boozy. 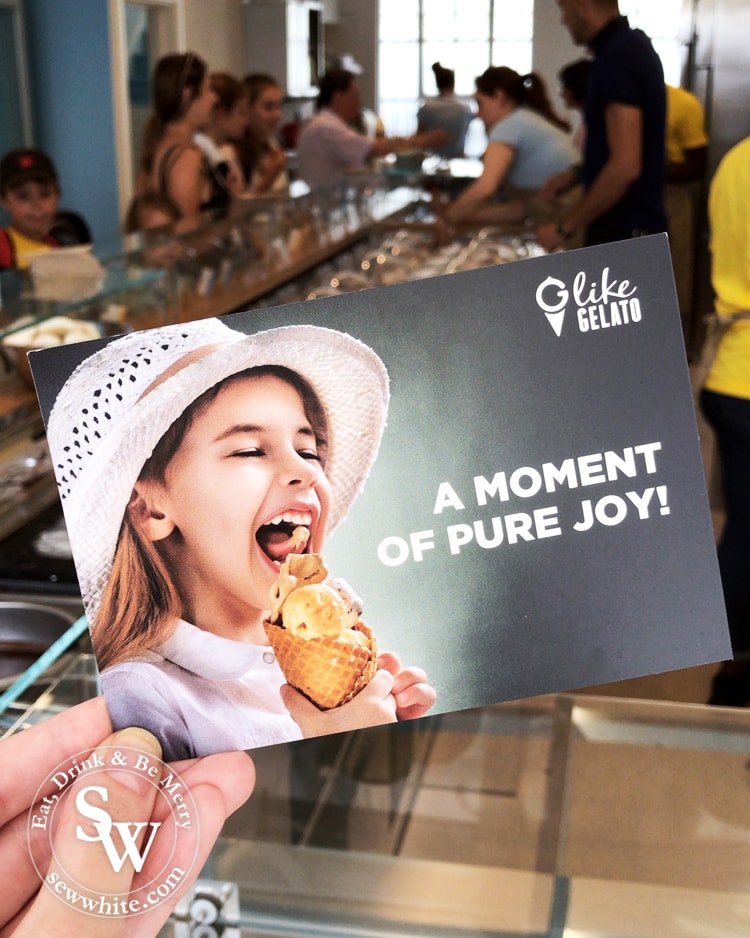 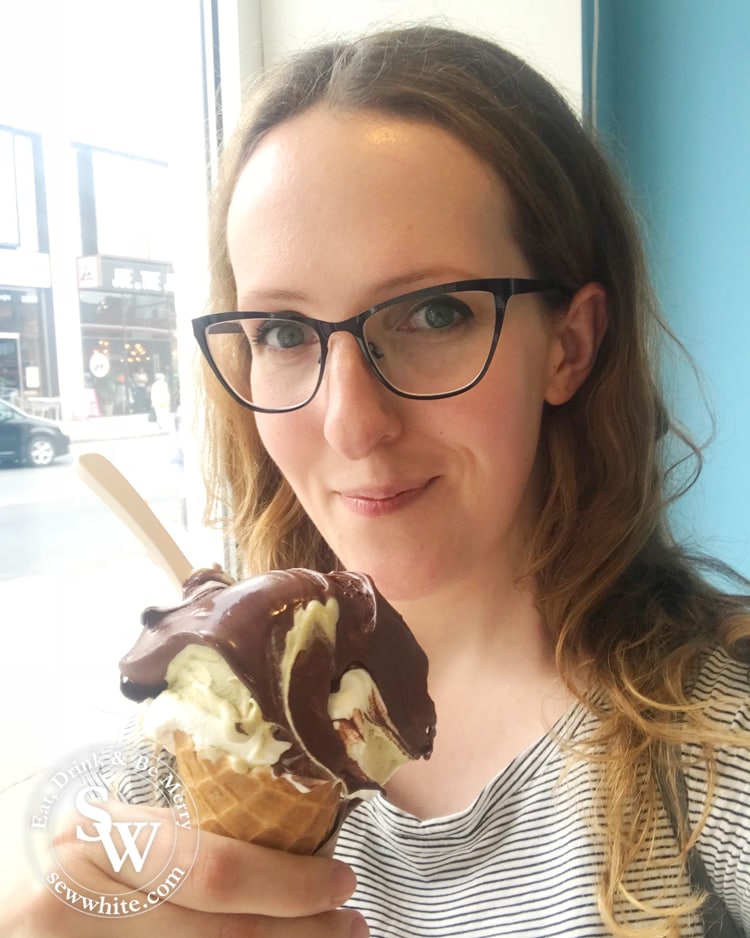 Such a happy me with my gelato

The art of Gelato

Watching the gelato be spooned into the cones was like watching art. It also makes the experience very exciting, watching your cone take shape. My first cone had pistachio, fior di latte and dark chocolate in. Yes it was huge and I was hugely happy. Three flavours and a giant cone might have been a little over ambitious as it was a huge amount of ice cream! I wish I’d had the chance to weigh it! 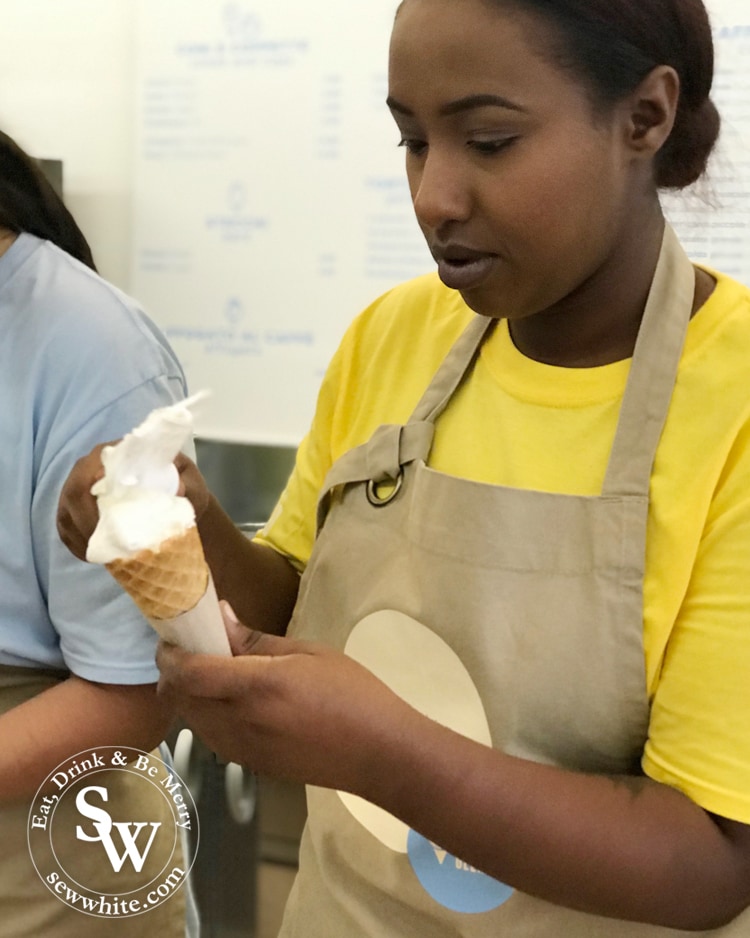 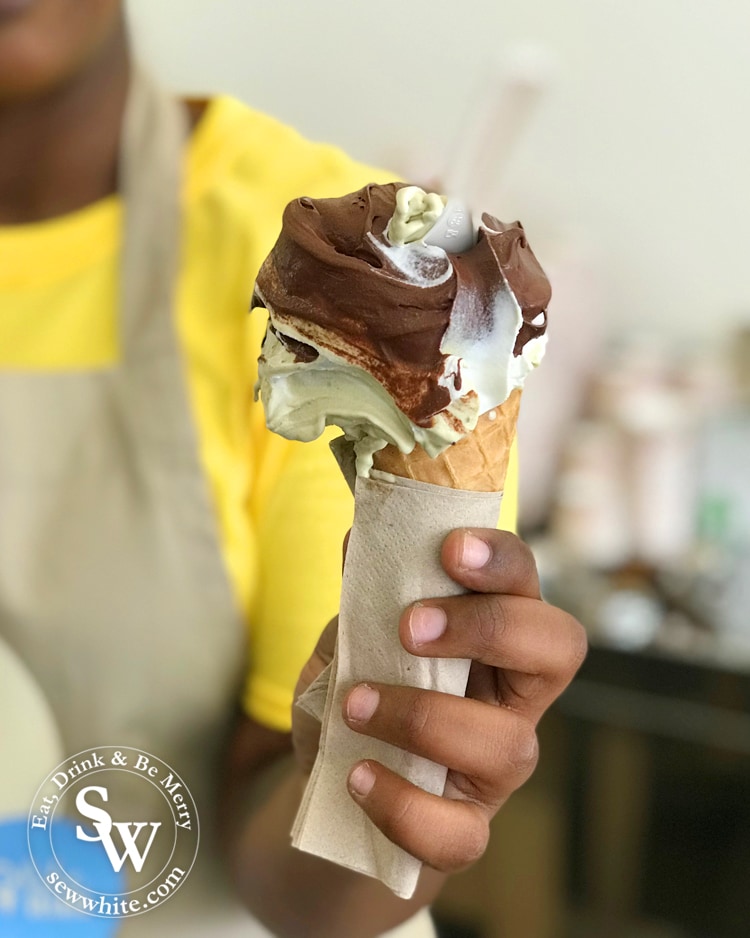 Just check out that gelato!

Other flavours I’ve tried at G like Gelato Wimbledon 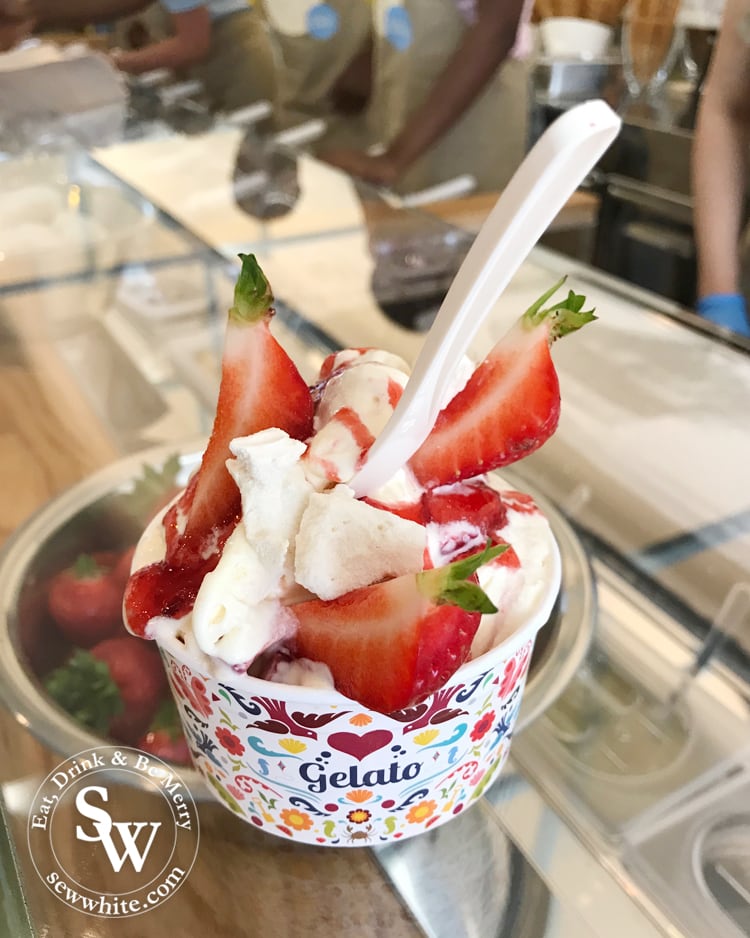 During The Championships G like Gelato were offering a super Eton Mess cold stone cut gelato and I had to try it. They took the creamy vanilla gelato and placed it on a cold stone and chopped it with fresh strawberries, strawberry sauce and meringues. Then it was topped off with a few extra fresh strawberries. It was divine. I loved the fruity and creamy mix. On a  hot day it just was the best thing to enjoy in the Love Wimbledon big screen piazza take over. The perfect treat to enjoy while watching the tennis at Wimbledon. 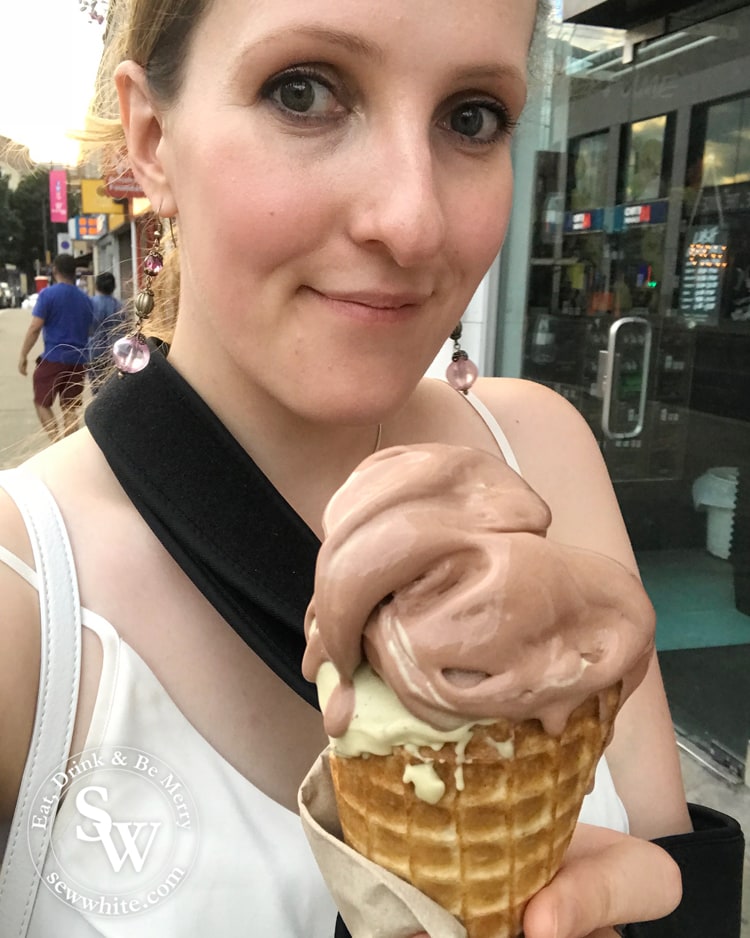 I was treated to this delicious monster of a cone for my birthday. It was a delicious scoop of pistachio, dark chocolate and salted caramel. Look at my happy face again! It did end up all over my face thanks to the heatwave London, luckily photographic evidence of that doesn’t exist.

If you want to check out this delicious addition to the London foodie scene you can find G like Gelato at 7 Wimbledon Bridge, Wimbledon, London SW19 7NH.

Check out our other lifestyle posts

Orange Lavender Loaf is a wonderful summer bake. I

•Toberlone Cheesecake• This cheesecake is del

AD •THE TASTE OF TENNIS• To celebrate what wou

This easy lemon and herb roast chicken is so succu

•Black Forest Cheesecake• This is my most ask

Roasted Parmesan courgettes. These are divine and

Enjoy a slice of my Strawberry Prosecco Cake this