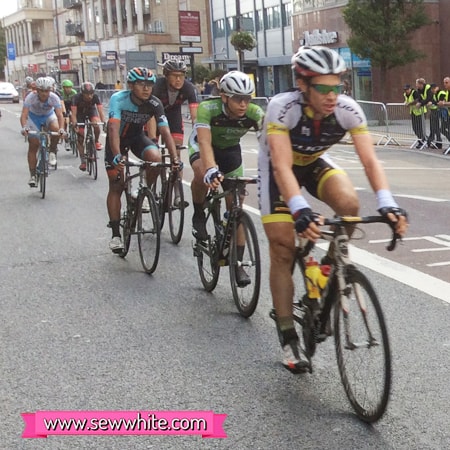 After the excitement of the Olympics and the huge cycle race through London and Surrey in 2012 I was so excited last year to see the cycling coming through the streets of Wimbledon. I loved it last year and it was so exciting to see amazing cycling whizzing straight by.

The excitement of last year meant I was excited about this years race as soon as I had the leaflet about it a few months ago. It was in the diary and I’ve been counting down the days. I was very excited to see Bradley Wiggins as I hadn’t seen him cycling before and now I can say I’ve seen a Tour de France winner cycling!

Today was the day and the cycling in both the Ride London 100 and Ride London-Surrey races were incredibly impressive as was the weather for the morning. The poor RideLondon 100 cyclists were caught in the stormy weather while coming through Wimbledon. As were the large crows which had come out to great them and cheer them on. Love Wimbledon had laid on a great street party including bike marking with the local police, ice cream, popcorn, penny farthing rides and music. Sadly the rain put a dampener on the celebration and the stalls had to be shut for a while so the stall holders could hide from the rain.

Here is my video of the impressive rain as they cycled through.

The afternoon and professional RideLondon-Surrey was a lot dryer for the cyclists but also happened a lot quicker. Blink and you missed them.
It was great seeing the cyclists power along our streets and up Wimbledon Hill – no easy feat! I love cycling and I wish the streets of London were always this empty and pro bicycle. I felt very inspired by the cyclists today and I will be out this week on my bike.

I managed to get some lovely photos this morning of the cyclists coming through. It was nice to see the decorated bikes and costumes that people were wearing. I hope they all made a lot for their charities as they did incredibly well. I wish I could cycle the distance they did. 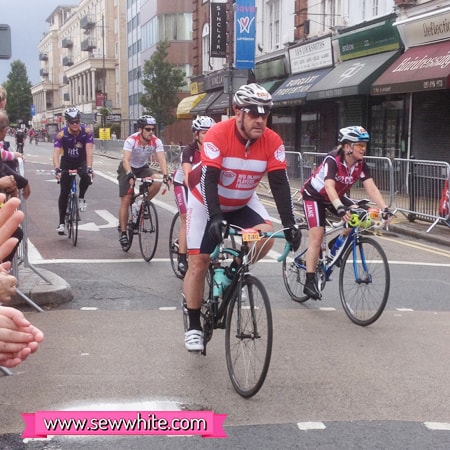 Everyone cheered this guy on dressed a lady through a very funny t-shirt. A lot of people had to double take as he went speeding by. I love the wig stuck on to the bicycle helmet! 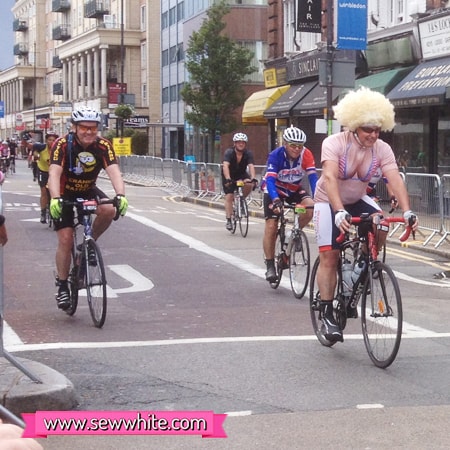 I picked up candy floss from the lovely team and it was delicious. It did go a bit wrong as the dampness and rain in the air stuck to the candy floss and it reduced in size so fast. I still loved it and found it hilarious how fast it shrank.

After coming home for a cup of tea and to dry off a bit we headed back out to see the pro cyclists coming through Wimbledon.
We were watching the race on TV and as soon as we saw Kingston we ran up the road and just made it in time.

We knew the cyclists were close as we could see the helicopter in the distance getting closer and closer.

The power and speed was incredible. I got far too excited and was cheering very loudly.

We stayed along with a lot of people until the last cyclist had passed and cheered and supported them all. 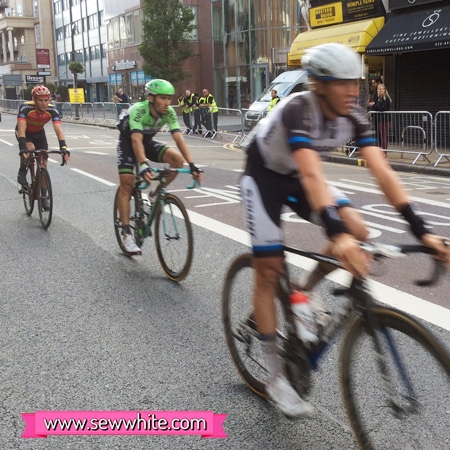 After the last cyclist had gone through and the roads started reopening a lovely pensioner on his bike going home went through so we all cheered for him too!