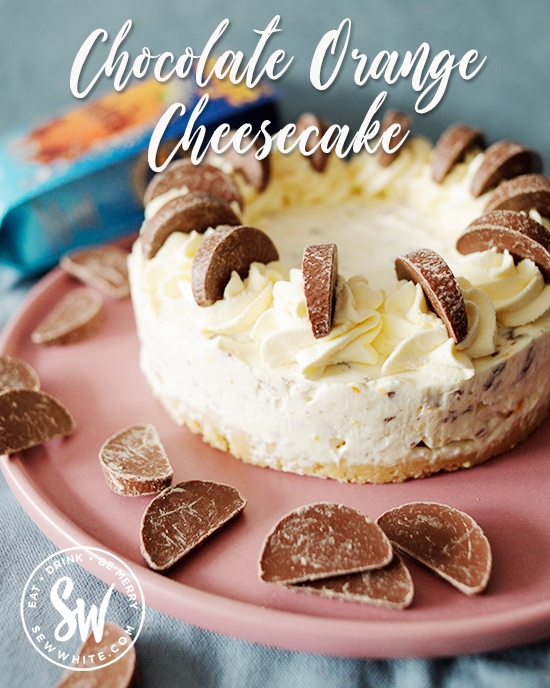 This delicious no bake Terry’s chocolate orange cheesecake is so easy to make at home. It uses fresh orange zest and chocolate in the cream cheese.

It was my boyfriends birthday recently and I asked what he would like as a birthday cake. I’ve made some gorgeous giant cakes for him and his parties before but year he wanted cheesecake. Before I met him he didn’t really like cheesecakes but since he tried mine he has turned into a bit of an addict. For this birthday he asked for a chocolate orange cheesecake. I haven’t made one of these in so long it was great to flex my cheesecake muscles again.

On top of the cheesecake I whipped up more double cream until thick and pipped it on the top in swirls. It is a beautiful quick way to decorate a cheesecake that everyone loves. I also think it looks super stylish. On top of the the double cream swirls I had to add more Terry’s chocolate orange segments. More is always better right?!

In this cheesecake I used a normal Terry’s chocolate orange in the cheesecake and topped it with the minis. As this is a six inch cheesecake it was a little small to use the big segments so the minis worked a treat. If I made this as an 8 inch size or above cheesecake I think the normal segments would have worked so well. I was tempted to add more grated chocolate to the top as I wanted to add more. I do love the flavour.

Ready to serve and it went down so well! There wasn’t a crumb left on the plate. It’s a great pleasure to feed people and see how much everyone loved it. I think this will be made time and time again. I’m craving it right now. I wonder if I can whip up one this weekend. It is definitely a lot of calories but if they are tasty they don’t count right? (joking of course)

What is a no-bake cheesecake?

A no-bake cheesecake is a cheesecake made with fresh cream cheese which is placed in the fridge to set, rather than baked in an oven. It is an English classic dish and is constantly being updated with new flavour ideas.

Adding extra chocolate and orange flavours to the cheesecake

I couldn’t just have the Terry’s chocolate orange on top. So I chopped up half a chocolate orange and zested an orange and mixed it into the cream cheese. The smell of this orange mix was absolutely insane. My mouth was watering and I couldn’t wait to dig in. Sadly I had to wait for a few hours. I did keep checking on it in the fridge. Having that extra beautiful chocolate and orange flavours made this dish so special.

I think that little addition made this go from great to outstanding. It was a loved dish and brilliant for the boyfriends birthday. It was great how quiet everyone at the party went when they had a slice. I think if everyone goes quiet while they are enjoying it, its a good sign.

How to decorate a cheesecake

Decorating a cheesecake is really easy and I believe that it can be done in a simple way which looks beautiful. A look that will grab everyone’s attention. I love a swirl of whipped up double cream which has been piped on using a star nozzle. It stands out beautifully. The swirl looks elegant but so so so easy to do. On the swirls I like to add a slice something in this case it was a chocolate orange segment.

I absolutely loved creating this cheesecake! I rather enjoyed it eating too. As did my guests. We were a little greedy so instead of 12 portions it worked out to be about 8 as a few people wanted double sizes.

View my other recipes

Ad Gift | a bap almost as big as my head. Order to